skip to main | skip to sidebar

So, I can thank Karen for the obsession that has erupted in my home and my community of friends....yes, we have all read the "Twilight" series!!!! And now, all we can think about is the hope that maybe, just maybe....Edward Cullen is REAL!!!! What is it about that book that leaves all of us women, young and old with our panties in a wad???? Is he the "perfect" man???
Have we all secretly yearned after the "unattainable" man??? That dangerous, romantic, perfect being on earth??? Edward has truly put EVERY man on earth to shame...and that is, that THEY AREN'T Edward....no matter how handsome, how much money they make, how romantic ,....NO man will compare to Edward Cullen.

Don't get me wrong, I love my husband with all my heart!!!! But there's a part of me...I think in ALL of us women, that wish OUR husbands were vampires!!!

If there is any chance of reincarnation, I wanna come back as Bella....and I want MY man to "sparkle"

Don't bother trying to call me on November 21st.... I'll be in the theater with my daughter and all my friends watching "Twilight"..... I'm sure when it's over, there won't be a DRY seat in the house! Ha! Thanks Karen!
Posted by I don't wanna grow up...you can't make me at 6:15 PM 1 comment:

So, this morning as I was frantically trying to find a RED shirt for my kids to wear to school for "Red Ribbon Week".... I realized that I only had one for Gabe. Isabelle doesn't own anything red...ugh!!! Guess I should update their wardrobe....but that's not the reason for this posting...

When you think they're NOT watching... 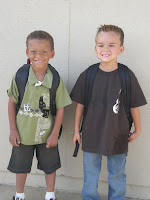 Just when you think your kids aren't watching everything and every move you make...you hear "your life" being played out in your kids room!!! Although some might not find this funny...I find it hilarious!!! Because if you know my husband and his best buddy, you'd completely understand why I find this so funny....They have the type of relationship that I'm completely convinced that if the wives were out of the picture, they'd be moving in together...LOL
You see, my husband and his best buddy Rich are like two little boys when they get together...laughing, telling stories and having some beers together....the only thing missing, is the two of them playing legos or playstation....so, this is where the story comes in...
My youngest son and HIS best buddy Ryan (who is the son of my husband's best buddy Rich) are talking happily on the way home in my car from their day at school. I tell them that they can play for awhile together till Ryan's mom comes home. They are giggling happily and planning their "day of play" on our short 1 mile trip back to the house...
I frequently love to listen in on conversations of 5 yr. olds because they are quite entertaining!
I hear the two boys in the room playing and talking.....Ryan and Gabe agree that they "want to play like their dads and talk about stuff and have some beers"..... Luckily, "their" beer is lemonade!!! They toast each other and go on with their imaginary "dad/dude" play....oh to be a kid again!
Posted by I don't wanna grow up...you can't make me at 11:55 AM 2 comments:

So here we are 2 months in the new house that we THOUGHT was going to be our permanent home and we're gearing up to move AGAIN!!! It seems like when we think we're doing the right thing, somehow it ends up not having been right at all. I'm not sure if my brain even works anymore? We've lost our home, and now we're losing another one, in addition to the town we love. I guess the bright side (if that's what you call it), is that we're moving back to the town we moved from to come here in the first place.....we have many friends there, so I guess that IS the bright side???? So, back we go to living in a tract home again....with your neighbors close enough to hear your toilet flush, close enough for them to hear all your family business, close enough to know when your kids are in trouble, .....and close enough to NEVER really even know your neighbor.
The sad thing is...back in the city, people don't take the time to get to know each other anymore.
People, sadly don't wave as you drive by, or talk to the people they live 6 feet away from....

The thing I'll miss the most about this little town is the fact that people TAKE the time to WANT to know you, perfect strangers wave when you drive by, and the kids are always featured in the local paper as if they are celebraties. In the 2 years that we have lived here, we have met more people that live acres aways from each other, than we knew in the neighborhood in the city that we lived in for over 10 yrs.

The sign that is posted as you come through the gates up here says, "Slow down, Relax, You're home"...too bad EVERY community doesn't live that way...
Posted by I don't wanna grow up...you can't make me at 7:53 AM No comments: 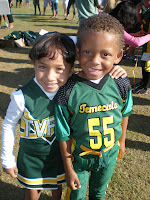 From the moment Gabe was born, the ONLY thing my husband and sons could think about was the day he would start playing football!!!! For the next five years, this boy went to every football game that his brothers played in, as well as watched every football game that was broadcast on TV. He would learn to love the San Diego Chargers...he had no choice!! Ha ha!
LT (Ladainian Tomilinson) became his favorite football player...and rightfully so....THAT'S who he wants to be like...which is just fine with me!
We always ask Gabe, "who's your favorite football player?" and he emphatically says, "LT!"
And when asked, "are you going to be as good as LT?" He says in pure gabe style, "I'm gonna be better!!!' That's my boy!!!

THE MANY FACES OF PEDRO 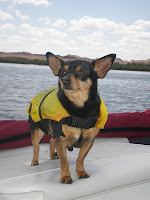 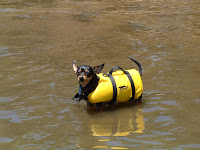 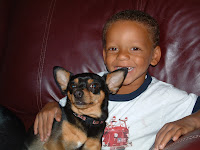 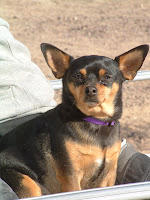 I'm sure that everyone has had that "one" sweet or quirky or strange little dog at some point in your life that has left a lasting impression on you....well, that's most definitely my pedro dog....I wonder sometimes how strange it is that you can love your dog as much as your own children?
well, it's true...and for anyone who owns both, I can most definitely attest that dogs are much easier to raise!!! Ha ha ha!!!

Pedro came into our lives about 4 yrs ago....in what was supposed to be an adoption for MY MOM...I found him on the website at the local animal shelter. He was the cutest little chihuahua we had ever seen! His face reminded me of a cartoon character with his huge eyes and enormous ears. I went to the pound to adopt him up FOR MY MOM. This poor little dog had the worst case of kennel cough and was brought home on medication. I've never heard a dog cough like that, and for so long! We kept him at our house for a few weeks until his kennel cough was somewhat under control and he could finally go to live with my mom at her house. Of course, in the meantime, everyone fell in love with this strange quirky little dog. It was really sad to see him go....skip ahead 3 months.....Pedro was doing fine at my mom's house, until he and one of my mom's other dogs, "scooby" had a knock down drag out full on fight till the death moment, at which pedro almost killed scooby. We are convinced that pedro and scooby were from "rival gangs" and they just weren't able to live in the same hood together....LOL
So, needless to say, it was in pedro AND scooby's best interest that the two be separated and that's how Pedro came to live with me.

He is the funniest little dog that has so many little quirks about him....HE'S convinced that he is a pitbull in a 7 lb. body. He walks around with a bad ass attitude and truly thinks he is king of the world....just ask the big dog across the street! Pedro crawls under the fence first thing in the morning to have his "morning showdown" with the big dog....and amazingly enough, the big dog turns and runs when he sees pedro coming! That's when pedro happily skips (yes, he skips like a little school girl), back to his kingdom where he entertains all of us on a daily basis.

You're probably thinking I'm a crazy "dog lady".... well, call me what you will...but until you've had that goofy little dog on your lap, or watched him skip in the yard, you don't know what you're missing!!!! Just ask "the sea monkeys"....I'm convinced that the "wild child" and pedro are soul mates!!!! Both are "quirky"....and have you laughing for hours at a time....BUT YOU GOTTA LOVE 'EM!!!!! 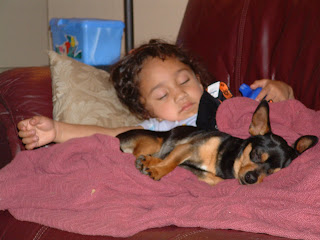 I've often wondered about aging....why is it wasted on the young??? As I sit here icing my knees and popping ridiculous amounts of ibuprofen, I can't understand why my body hurts the way it does just from teaching dance and cheer techniques??? I've done this my whole life! But, for some reason now that I'm in my 40's...the body wants to rebel....THIS JUST CAN'T BE!!!! My brain tells me I'm still 16....my knees and all my aches and pains tell me otherwise.

I can still "bust a move" with all the kids and MOST of the time put them to shame!!!....I pay for it later though...hahaha!!! Every once in awhile I'll even have kids stand in "awe" over some of the things I can do. Their ever famous line is, "wow, I didn't know you could move like that AT YOUR AGE!!!"....... But, let me tell you one of the greatest things about coaching....when they make comments like that....I can make them run laps till they puke!!!!! Who's laughing now girls???
Posted by I don't wanna grow up...you can't make me at 9:33 AM 2 comments:

I don't wanna grow up...you can't make me
I've been happily married for over 20 yrs and together for 23 and counting... I married my high school sweetheart and we have 5 kids, 3 dogs and 2 cats. I love life, having some wine with friends and coaching dance.....I love to give back to the kids and hopefully impact their lives somehow. I want to leave this world knowing that I made the difference in the life of a child.